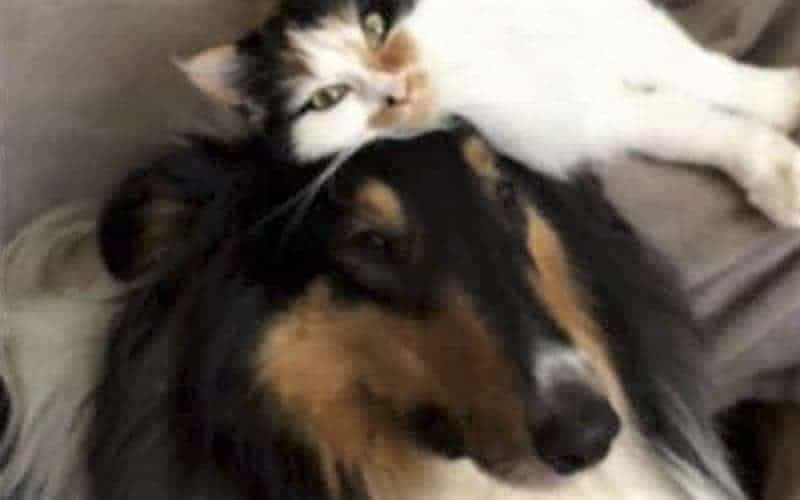 The ancestors of our present-day Collies were famous for their ability to locate lost sheep on the Highland moors of Scotland. In many of our modern Collies, this search-and-rescue instinct is alive and well. But for lack of sheep, Collies will often find and present their people with other things.

My Collie puppy, Yoshi, has already distinguished herself as the strangest dog I have ever owned. She likes to excavate old Mason jars and assorted ceramic flower pots (circa 1940s-1950s) from the dirt of our back yard, lay them tidily near the door, then wait for me to notice and praise her treasure-hunting skills.

Gustav, my big marshmallow of a Collie, once disappeared into the cattails lining the bottom of a deep ditch while we were out walking, then gently nose-nudged a stray guinea pig up the incline to me.

In Lauri Comstock’s case, her Collies have gifted her with cats – twice now.

Her most recent acquisition came after returning home late one night from her hospital shift. She let the Collies outside, gave them sufficient time to do their business, and called them in. It was mid-summer in Kansas and still sweltering hot even though it was near midnight.

Instead of coming like usual, Guy Smiley stood and barked intently at her, refusing to move, and Gus was nowhere to be seen. Going out to investigate, she found Gus-Gus lying next to a disoriented, panting cat. Lauri wrapped the cat in a towel and brought him inside. 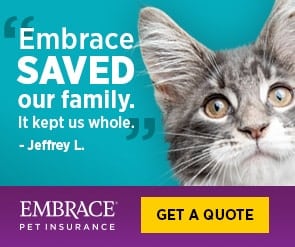 Noting the cat’s swollen face and appearance of being on death’s doorstep, Lauri rushed him to an emergency vet. He had an abscessed tooth and a too-high temperature of 106°. (A body temperature of 103.5° or higher is considered a fever in cats.) The veterinarian administered an antibiotic, and the next day Lauri’s regular vet pulled several teeth.

Lauri did her best to track down the cat’s person. She asked around the neighborhood, and one neighbor told her the cat had belonged to someone who had moved away. But when she contacted the supposed owner, they denied ever having a cat. She even hung posters and posted in the “Lost & Found” section of Craigslist. No one ever claimed the ailing feline.

The local rescues Lauri contacted said finding the kitty a new home would be very difficult, since her vet had estimated him to be between 13 and 15 years old. That is how, in Lauri’s words, “I ended up with a senile, toothless, grumpy old cat who I actually really love.”

She dubbed him Salvadorable Purrez, “because the Royals game was playing when my sister and I were brainstorming names, and Salvador Perez had hit a home run.”

For about three months after Lauri brought Salvador home, he hid. Eventually, the dogs and other resident cats won him over.

Anyone who has ever had Collies can testify that they tend to be wonderful guardians of the small and weak, and Gus and Guy are typical Collies. Though they came from vastly different backgrounds, the instinct to care for the helpless was strong in both of them.

As a young puppy, Guy Smiley was abandoned in a park and wound up in a shelter labeled a “Sheltie/Shepherd mix.” Someone from PALS Animal Rescue realized what he really was, and Lauri adopted him from there.

Guy’s helpful streak manifested itself one day when a box turtle meandered into the yard. Perhaps seeing its slow pace and wanting to be of service, Guy used his long nose to push it from one side of the yard to the other on the double. Lauri was laughing so hard she forgot about the bushes she was supposed to be trimming.

Gus, on the other paw, is a retired show dog, found at a time of dire need. When Lauri’s older Collie, Gracie, passed over the rainbow bridge, Guy was so depressed he stopped eating.

Lauri knew Guy needed a companion right away, and a fellow Rough Collie Facebook group member just happened to have one available. For Lauri, it was love at first sight. Angus was Gus’s original name, but Lauri claims “that is way too dignified for him.”

Gus and Guy live with four feline friends, one of whom, a calico, was brought into the fold by the tag-team efforts of Gracie and Guy Smiley. Lauri first noticed the scrawny kitten drinking out of her pond. For a whole week, she set out food for it and tried to coax it to her, but it ran from her every time.

On Sunday, a rainstorm rolled in, and the Collies took action. Apparently deciding no kitten was going to be stuck outside in a drenching downpour on their watch, they rounded up the scruffy stray. Gracie used her nose to shepherd her into a corner of the garage.

That gave their human a chance to step in. Lauri took the weak kitten – completely infested with fleas and ticks – to a vet, who found her so anemic from blood loss that she had to be given an IV. The calico cat was christened “Sunday,” after the day the Collies brought her in out of the rain.

Like nearly all of Lauri’s animals, Gracie was also a rescue, originally coming to her from Sheltie Shack Rescue, which sometimes takes in Collies since the nearest Collie oasis is several hours away.

Lauri’s other two cats were also strays. The tortoise shell, Stella, was found in a parking garage.

Saffron and Sage turned up as littermates at Lauri’s sister’s house. Lauri took Saffron, and her sister still has Sage, plus another former stray. According to Lauri: “No one in my family ever intends to get cats. They just show up!”

Since Lauri is dedicated to helping others in her work as a pediatric nurse, it makes sense that she keeps canines who are clearly committed to the same mission.

Things to Consider Before Getting A Border Collie