Collies know when they’re being admired and when someone is not a threat. So it was whines, not deep, protective barks that drew my attention to the man standing near the back window of my parked car, staring at my Rough Collies with a beatific smile on his face.

Jim gave off good vibes, so I got out of the front seat to stand in the parking lot and talk to him while I waited for my friend to reemerge from the store. As is so often the case with the older generation, seeing my Collies Gustav and Yoshi had brought back memories of his childhood Collie. And what a Collie she was! This is Jim’s story. 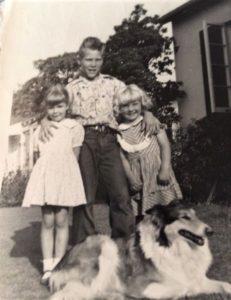 I was about 10 years old in the 1950s when given a young Lassie-like Collie. The intelligence, beauty and love we received from her is indescribable, and she instantly became one of the family.

Mom would remark, “That dog needs a bath…” – meaning I needed to bathe Queenie. When Queenie heard what Mom said, she would immediately paw open the back door and go outside! After cleaning and grooming, I would teach Queenie some tricks: sit, down, shake hands (even the back leg) and speak for food with that unique collie bark.

My little sister Pam was a toddler, and one day when I was “watching” her and turned my back, she toddled down our driveway into the street as a vehicle was fast approaching. Before I could reach Pam, Queenie ran into the street, got a mouth full of diaper and dragged her to safety!

When older, *Pam again slipped away from me, riding her trike down the sidewalk. When I realized that Queenie was also gone, I had an idea where she was. I jumped on my bike, catching up with them two blocks around the street corner from our house. Pam was pedaling furiously and not steering well, but Queenie was protecting her by pushing her back from the road if she strayed from the sidewalk.

One day when hiking in the California hills, Queenie was pushed off the narrow trail into a cactus bed while protecting my sis by trotting on the outside of the trail. I carried her home in my arms, about four blocks distance. We picked needles for hours!

Dad had Queenie bred with a tricolor Collie, and she had two pups. One was sable and white like her and the other was a beautiful tricolor Collie named Duchess.

Queenie suffered with a skin condition, and the animal doctor once sent her home with all her hair shaved from her neck to her tail. When we took her for a walk, someone called the cops saying there was a lion loose!! The police came out but laughed when they saw Queenie.

In 1955 we moved to North Carolina and lived by a busy new interstate across from a restaurant where we frequently went to eat. I would tell Queen to “Stay” and not follow us. From the restaurant, I always saw her peeking over the embankment, watching us. She knew not to cross! 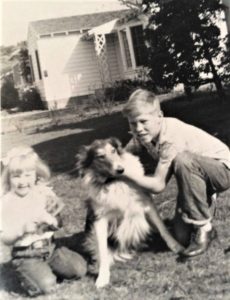 In a few years, she was in bad shape with mange and rheumatism. The vet said she was suffering and suggested putting her down. I couldn’t stand for her to suffer and with tears flowing down my seventeen-year-old cheeks, I picked her up, hugged her goodbye and handed her to the doc. Queenie looked back over the doc’s shoulder to see if I was coming, and that look of dismay will always haunt me. That was the last I ever saw of my awesome Queenie.

Dogs are marvelous creatures, but they don’t live long. I have had to bid farewell to a dozen or more great dogs in my 79 years, but Queenie was my first dog and is still number one!

Jim Stutts has led a varied and interesting life. He has drag raced, been part of singing groups, worked as a hospital and prison chaplain, written for several Christian publications, and has had many speaking engagements, including preaching all around the United States and in countries such as Cameroon and Trinidad. Jim also enjoys restoring antique automobiles and competing in old car shows. In 2019, he sustained injuries from a freak accident that left him hospitalized, but says he is now “back to being abnormal.” He has been married to his wife Joyce since 1957, and together they have 4 children, 11 grandchildren, and 4 great-grandchildren. 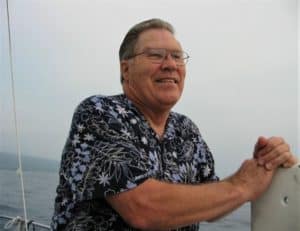 * Probably thanks to Queenie, Pam Morgan is still alive to this day and contributed some of the photos used in this post.

What Is A Scottish Collie?