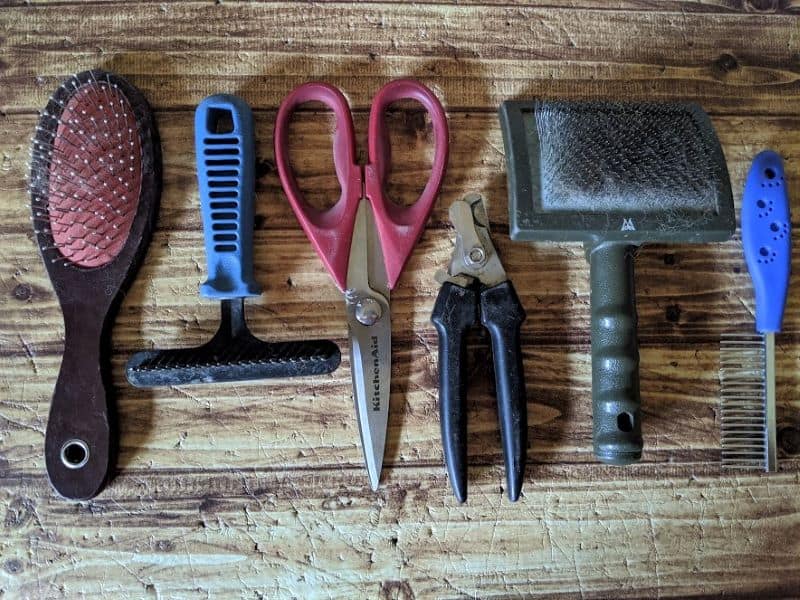 Rough Collies‘ long fur requires significantly more attention than the shorter coat of their Smooth Collie counterparts. Wondering how to groom a Collie? Here is a brief list and assessment of some basic Rough Collie grooming tools to help keep your furry friend looking their best.

When it comes to grooming your Rough Collie, the pin brush is your best friend. There are many styles and brands to choose from, which accounts for the wide variation in pricing. This essential tool can be picked up at places like Walmart for under 5 dollars, or found on Amazon with prices varying from 10 to 30 dollars.

What kind of pin brush you get depends on your preferences and your budget, but it really is worth it to get a bigger brush with a comfy handle like this one to cover more coat area and avoid hand cramps while brushing. 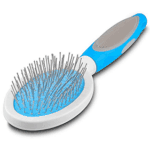 When a Rough Collie goes through its seasonal shed, or “blows its coat,” the undercoat comes out in clumps. If you only use a pin brush, you will find yourself exhausted as you brush and brush, creating fur piles and tumbleweeds on the ground with seemingly no end in sight. At such times, an undercoat dog rake is a lifesaver. 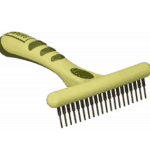 You will want to use a comb mainly for the feathering on the backs of your Collie’s legs and the silkier hair behind the ears. The fur here tends to be more prone to tangling and picking up foreign objects (leaves, burrs, twigs, etc.). To make the grooming process more pleasant for your Collie, do be careful not to tug and pull too much if you hit a snag.

The comb can also serve the dual purpose of cleaning hair out of your slicker brush, if you have one with wire bristles. Just be sure to purchase a wide-toothed dog grooming comb, not a fine-toothed flea comb. 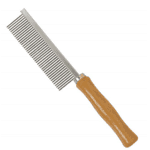 Once you have gone over your Collie with a pin brush, you can use a slicker brush to go after any tangles you may have encountered, perhaps in areas like the base of the mane near the throat or in the long “pantaloons” on the backs of the hindquarters. For a “touch-up” effect, the slicker brush is good for finishing things off and smoothing everything out.

I have an “unbreakable” slicker brush by Millers Forge that has served me reliably for more than a decade. As a backup, I also use a self-cleaning dog slicker brush, primarily when my Collies pick up burrs on our rambles. This allows me to get rid of the burrs without touching them, saving me the annoyance of pricked fingers. 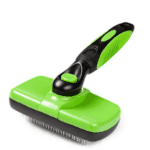 You will want scissors primarily for trimming hair around the feet/paw pads and backs of the hind legs from hock to foot, or the dog’s “ankles.” And, if you encounter a particularly difficult mat on your Collie (often behind the ears), scissors can be used as a very last resort to cut them out. Some Rough Collie owners (myself as well as those who breed and show their dogs) also trim a “sanitary path” under the tail and near the genitals. This is especially helpful for males and heavily-coated Collies.

Any scissors will do, even ones from a dollar store, although they will probably dull far sooner than a good pair of round-tip grooming shears for dogs. Once dull, the scissors tend to catch and pull, which never makes a dog happy.

I had a pair of pet grooming shears when I was a teenager that I used on the two family Collies. Much to my surprise, my youngest sister (an aspiring hair dresser) was still using them – on herself and friends – when I came home after graduating college! 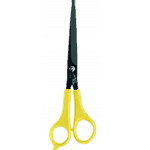 Having a nice pair of nail clippers can keep you from hearing “click-clack” as your dogs walk through uncarpeted areas of your house. Some nail clippers for dogs even come with a nail file and a guard to protect the quick as you trim. As an added bonus, dog nail clippers can also be used on cats’ claws, if you have both canines and felines.

Some people like Kolby (owner of Rough Collie guide dog Amelia), swear by Dremel grinding tools instead of nail clippers. Using a nail grinder would of course depend entirely on yours and your Collie’s comfort level. 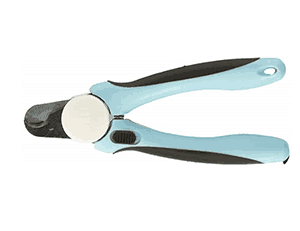 Do you have a favorite grooming tool or pro tip? Feel free to leave it in the comments below!

If you liked this post, you can leave me $1 or more tip on vocal.media or purchase one of our recommended dog products from Amazon so we can buy more dog supplies ourselves!

Get new blog post updates through our monthly email newsletter.