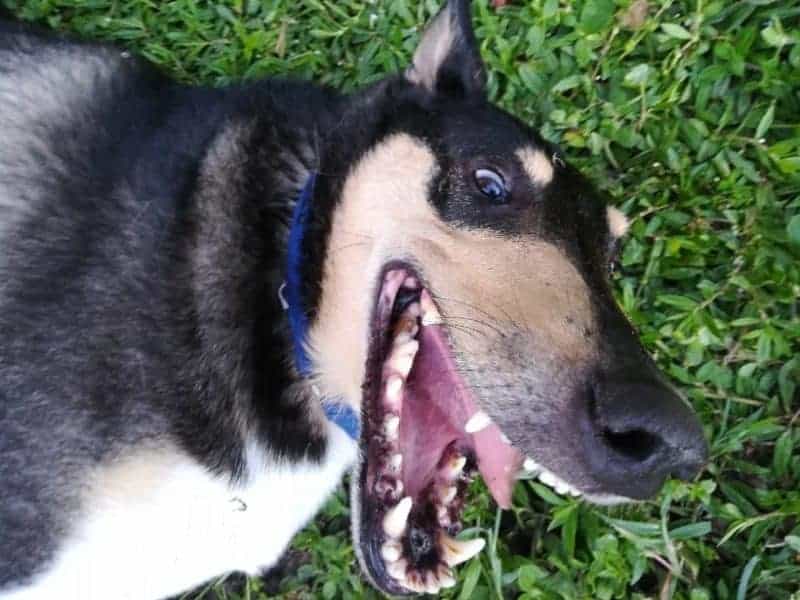 When we went to the dog park, I noticed a happy dog approaching the gate to greet us. With brimming excitement, I asked Emerson, “Is that a tricolor Smooth Collie? It is!” I answered myself. “It is a Smooth Collie!”

His name was Frank, and he was a failed service dog. Curious, I asked Frank’s owner why he hadn’t passed.

“He had a thing with stairs,” he said. “Just really didn’t like them.”

I laughed and said, “So he didn’t quite make the cut, but he’s still a good ol’ boy.”

Similar to both Gus and Yoshi, my two Rough Collies, Frank played using a lazy sneak attack. He would calmly lie there, panting happily, then casually lunge for any dog who came within striking distance, mouth open wide and a playful gleam in his eye. If that dog engaged him in mock warfare, he would merely roll from side to side and gnaw at their legs from beneath them. 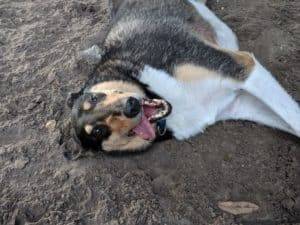 When Frank felt he wasn’t being given enough attention by a person, he would bark at the neglectful human until they petted him.

If that didn’t work and they just continued standing there, he would circle around behind and walk right between their legs. This was a surprising move calculated to garner maximum attention. Since he was a tall dog, it was very effective. He just parked himself between his target’s legs, head tilted and staring up into their face, until he was patted and made much of.

However, when Frank barked at the very drunk man who had been belligerently yelling and cussing out another person when we arrived, it was NOT a “pet me” bark. The man, who positively reeked of alcohol, slurred, “Oh, look, he wants me to pet him.”

But every time he tried, Frank stepped aside and continued barking. I commented to Emerson that’s what our Collie Yoshi does when she doesn’t trust or like people and she said, “Yeah. They just shimmy away, like they’re in the friggin’ theatre.”

Nor did Frank appreciate the man’s impressive beast of a pit bull, aptly named Thor, who was the reason for the disturbance we had heard. Seems Thor had growled at a smaller dog, and that dog’s owner had become afraid and angrily told the man he shouldn’t have an aggressive dog at the park.

Thor’s drunken owner had responded to the woman by refusing to leave, cussing her out, and yelling, “He’s FRIENDLY!” as she left the dog park. On her way out, she warned us, “I wouldn’t take your dogs in there if you don’t want them to get bit. That big pit bull is mean.”

In my assessment, Thor was not mean. Somewhat dominant, yes, and possessive over tennis balls – he growled warningly at any dog who thought about taking his balls away – but not a true threat. That didn’t stop Frank from standing in front of Thor, barking in apparent reprimand, every time he growled at another canine. 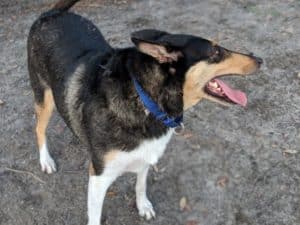 Frank also boofed at a little Chihuahua mix. The tiny dog (who was much outsized in the big dog enclosure) was jumping up, bracing his short front legs on Frank’s hindquarters to get a good whiff of the taller dog’s arse. If the little one had pulled that stunt on a less patient dog, it might have been hazardous to his health.

Frank simply swiveled his neck around and barked once, loudly, directly in the tiny annoyance’s face. Surprised, the small one fell backwards as if he’d been blown off by the force of Frank’s bark.

Basically, in typical Collie fashion, Frank’s method of dealing with any less-than-pleasing situation was to bark about it.

He also mentioned the fur type is the reason most service dog associations choose to use Smooth Collies over Rough Collies, since they require comparatively little upkeep.

According to him, the organization he volunteered with, the Guide Dog Foundation, only accepted and trained Smooth Collies, Golden Retrievers, Standard Poodles, German Shepherds, and Labrador Retrievers (which made up 80% of the dogs they used).

I left the dog park congratulating myself on actually making conversation and learning new information. Then I realized that I had no idea what the name of Frank’s owner was. I hadn’t even asked.

My next time at the dog park, I was excited to see Frank, yet hesitant to talk to Frank’s owner again. I reflected that in a normal social interaction, not getting someone’s name would probably be considered bad form. But for dog people, that was usually acceptable.

So I greeted the guy again, half joking, half apologizing for previously asking his dog’s name but not his. He introduced himself as Michael and said it was fine, since he’d apparently done the same thing.

I asked Michael if he’d had any other dogs fail, and he said, “Just Frank. Out of over 50 dogs I’ve worked with, he was the only one who didn’t want to work. He hated going to work every day.”

Which got me thinking, maybe Frank was just a little too human for his own good. 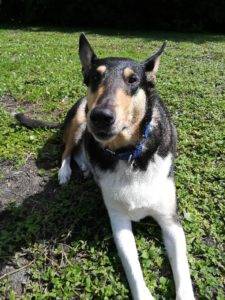 The last time we saw Michael and Frank, our dogs were delighted to see each other. They have similar play styles, a shared approach to life in general, and just really seem to get each other on a deep emotional level. After exchanging proper canine greetings, Frank approached us humans for some affection.

“Watch out!” Michael warned. “He just got a bath.” Sure enough, Frank was still damp when he rubbed up against my legs, but he was clearly so happy I didn’t have the heart to push him away.

Then Frank started rolling in the dirt and gator-snapping at Yoshi’s legs when she raced by him. “Frank…” groaned Michael, “I just bathed you.” When Frank bounced back up and rubbed against my legs again, he left a nice coating of muck on my jeans. (Reasons why I never wear anything nice to the dog park.)

When I asked Michael how often people actually know what his dog is, he said almost never. “People usually think he’s a Greyhound/German Shepherd mix,” he explained. “I hear that one a lot.”

Shortly thereafter, I saw one young couple staring at us with concern while Gustav (my male Rough Collie), Yoshi (my female Rough Collie), and Freckles (Emerson’s Aussie mix) happily romped together with Frank. Seen side by side, regardless of coat length and color, the Collie resemblance is unmistakable. “Do they have four Collies?” one said quietly to the other.

Though I could see why they might assume Freckles was a Collie mix, they were wrong about her heritage. But at least someone finally figured out what Frank is! 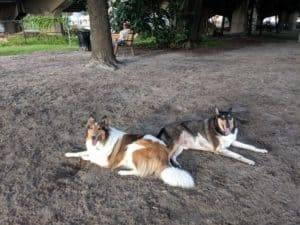