My dog gets cat-called more than I do. I can’t take him anywhere without cries of “Lassie!” inundating my ears. Gustav, my vain and glorious Rough Collie, thrives on the attention. I do not. (He is a social dog, and I am a painfully unsocial human.)

Usually, I’ll smile like I haven’t already heard the Lassie comments 4,000 times and counting, which may sound like an excessive exaggeration but probably isn’t. Once when I took Gus along to a local fair, my friend and I counted how often we heard “Lassie!” We gave up after fifty. That was one occasion, and my dog goes everywhere with me.

More often than not, I enjoy having a nostalgic dog that reminds people of the canine TV hero of their childhood. On my grumpy days however, I become uncomfortable with all the notoriety. “Gus, do you think you could tone it down?” I’ll ask him. “Could you maybe throw on sunglasses or a hoodie and hide your identity?” 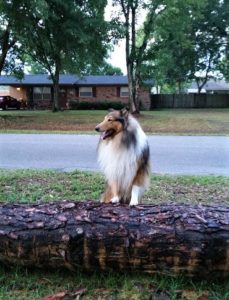 Gus’s majestic face and mane were hanging out my car window at a gas station one day, and a drunken man said, “What’s that, Lassie? Did Johnny fall in the lake?” Then he cackled like he’d just proclaimed the funniest joke known to man.

Of course it’s common to hear that line too, but he didn’t even get the reference right. (Timmy, I thought. Not “Johnny.” Timmy fell in the well.) I speculated his level of inebriation had something to do with the misquote.

Also thanks to Lassie, I’m sure, most people assume Gus is a girl, which is ironic since all the Lassies have been males. It’s like this subconscious idea exists that all Collies are females, sort of the canine equivalent of hermaphroditic earthworms or Amazons reproducing without the aid of males. (Don’t need no man!) 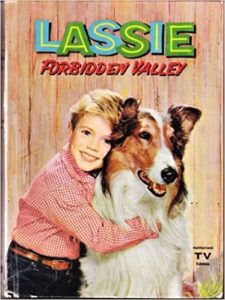 My favorite occurrence of my dog being hit on happened on one of our daily walks. A man drove past us, reversed his car, rolled down his window, and over-excitedly called, “That’s LASSIE!” like he’d just sighted Sasquatch.

Somehow I didn’t want to disappoint this enthusiastic man with Gus’s real name, and I was tired. So I thought, Why fight it? and just went with it, smiling and saying, “Yeah.”

He kept slowly driving next to us, grinning at Gus. Then he noticed Freckles, my roommate’s dog, and was practically ecstatic. “That’s Lassie AND her baby!” he cried, as if he’d further discovered Sasquatch not only existed, but had a child.

Again, I didn’t bother to set the record straight. Squinting at Freckles, I thought, Sure, why not. Gus could be a girl and have a puppy. No matter that the puppy ascribed to him was actually an Australian Shepherd/Great Pyrenees cross. Close enough.

Suddenly, he looked to his adorable passenger, a small boy perhaps five years old. “That’s Lassie, son,” he said gravely, for all the world like he was introducing him to a great American icon. Seriously, in the tone of a tour guide saying, “And that, son, is the Statue of Liberty, built when our country used to love taking in immigrants…”

A teachable moment, to be sure. I fondly imagined that was when the man realized his young boy had no idea who Lassie was, and that they would be watching Lassie reruns together over popcorn later that night. (The dad with that same giddiness, and the boy wondering why the on-screen characters weren’t colored in.) 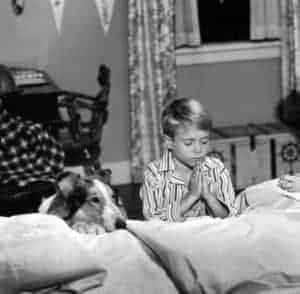